At only one week old, Jess and Rob Gold were given the news every parent dreads. Their daughter, Alex, would need to undergo a life-saving operation to treat her biliary atresia. At five months old, Alex underwent a liver transplant the Hospital for Sick Children in Toronto. Now, at the age of seven, Alex is an enthusiastic young girl about to enter the second grade. Grateful for her daughter’s operation, Jess has dedicated herself to assisting the transplantation community by running a Trillium Gift of Life Network volunteer group. We had the opportunity to talk to the Gold family about their experiences.

What did it feel like having a child who needed a transplant?

Jess: Having a first child with a sickness is completely different than anything you could read about, right? To have someone that’s sick and not knowing what’s coming, not knowing what to expect, seeing her get worse but not being able to do anything about it is very much like a rollercoaster. One day she’s laughing and giggling, the next hour she’s screaming and crying.  You don’t know why. Is it pain? Is it just baby? Is it just attitude? You don’t really know anything, it’s terrible.

After some time in the dark while tests were being conducted, the Gold family was eventually informed that they were placed on the waiting list.

Jess: Being on the waiting list is like planning for a pregnancy. You have to keep that bag packed the entire time. When you’re pregnant, at seven months, the doctors tell you to pack a bag and leave it by the door, ready to leave any time.

Jess and Rob also elaborated on the stress associated with balancing work and taking care of Alex.

Jess: If you want to be healthy enough to help her, you need to go home and sit on your couch for an hour and do nothing. It’s very important to take care of yourself […] There are single parents who are unable to visit their children at the hospital, because they have to work. There was a little boy who had to live near the nurse’s room in an exerciser because he never had a visitor. My stepdad would act as a visitor to children who didn’t have visitors. He would take them outside for a story and bring them back in.

What were some of the emotions that played out during your family’s journey?

Jess: The emotions for any parent, whether it’s a transplant or anything, the emotions are all the same. It’s fear, it’s anxiety. You’ve got courage because you need to be strong for them. You’ve got different emotions that you have to go through for them.

My mum and I were both blood type matches for Alex and could have been donors pending further testing. My mum refused to let it be me, she said that a baby needs her mum more than they do their grandmother. She went through all tests in Toronto, and the day the phone call came for the liver from the deceased donor, my mum was going in for her last test. We didn’t have to have my mum do it. It would’ve been different to have both my mum and Alex recovering, because my mum is my main support.

What gave you hope?

Jess: The hope part was moreso the support part, the friends and family that were supportive of us, and the doctors.

Do you still feel the impact of the transplant?

Jess: She takes medication every day. She now only takes one pill a day, an immunosuppressant. When she first came home, she had a dish with twenty different drugs – the eight and eleven o’clock in the morning doses. She’s gone down from having thirty something drugs a day to just one a day because she’s doing so good. I find I forget her transplant every now and again, because she’s so healthy.

Jess: We have to be a family of germaphobes. If someone is sick, we can’t converse with them. If she get’s chicken pox, we have to go to the hospital to get her monitored.

The Gold family hosts a yearly get together, to commemorate the time since Alex received her liver and to thank the people who have supported the family throughout the process.

Jess: It’s pretty much our closest friends and family. We thank them for their support, and we bring in new families to the transplantation community. We always do a little talk on what organ donation is, what happened to her, and then we go to the park and we let off something. We’ve done balloons, we did love doves for the first anniversary. One dove signified her, and one signified her donor. They do some acrobatics in the air, and fly together to Toronto, where they were from.

What sparked your desire to become an advocate for the Trillium Gift of Life Network?

I pretty much want to give back. I’ve been educated on how the wait list works, and wanted to help figure out how we as the community can shorten the wait time. Being personally experienced gives me the motivation to do this, and it gives me something to focus on.

Is there anything you would want families on the waiting list to know?

Parents need to talk and get their emotions out. Parents should know that organ transplants do work, but while their child is on the waiting list, they want to hear that it’s coming. People would come in and check in on you, give motivation, and try to show the light at the end of the tunnel. The only thing I can think of is talk and learn. And do what you can; the time that you have is worth it.

Speaking to the Gold family, we began to understand how many different aspects of their lives were impacted by Alex’s liver transplant. The operation certainly was not an isolated event, rather, it sparked a lifelong journey into raising awareness for organ donation, introducing the Gold family to the transplantation community.

After our talk, the Gold family showed us the aquarium they installed in their basement, modelling the plastic fish display Alex loved to look at during her hospital stays. Alex also laid out for us the plethora of gold medals (most of them for swimming) she had won at the Transplant Olympics while Jess showed us a collage frame where she kept photos chronologically documenting her daughter’s progress. It was incredible to see how a liver transplant helped a sick baby grow up to be the energetic girl Alex is today. 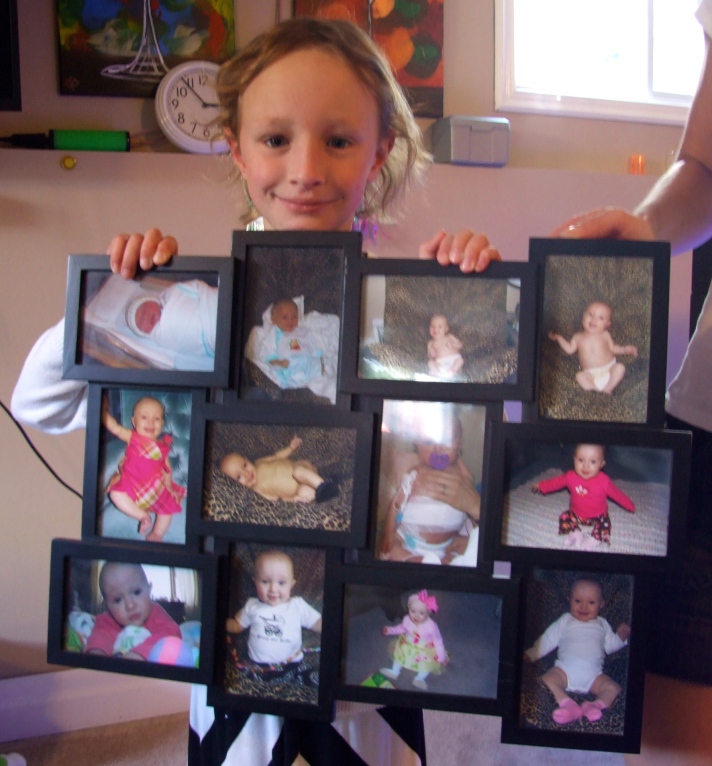